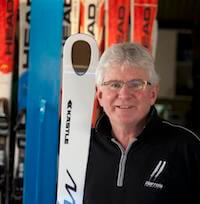 Wayyyy back in the 1970's David Harrison aka 'Harro' made the move to the Snowy Mountains from Redhead, Newcastle. He slugged it out for about 15 years working in the ski industry in Cooma and Jindabyne.

When Harro met Sue in 1987 and started a family, the grounding for one of the best local family businesses, Harro's Snowsports, was born.

In 1992, Harro moved into a small, freezing little fire-shed at Lake Crackenback with two staff members and big dreams, and the legacy of Harro's Snowsports was formed. A few extensions later by Resort owner Bruce Marshall, and some hard earned turns along the way, Harro now has a loyal team of fifteen staff.

Starting in 2009 Harro set up abroad and created a thriving winter season business in Japan. As of 2021, they have decided to simplify and keep to the Aussie only business model.

Harro's is a dedicated, honest establishment with high integrity and family values that has earned them a reputation for treating everyone like family. They enjoy helping people from beginners to professionals, and sponsors many young up and coming racing skiers.

Harro has been working way too hard for way too long, but do you think he's going to stop any time soon .... probably not!

RETAIL & HIRE
Skiing since the age of 5, snowboarding from 13 onwards, Emrys has done 8 years with the Disables Winter Sports, and 10 years in ski retail

WORKSHOP
When not skiing with the National Ski Team, Zali has 8 years experience tuning skis and boards and is head ski tech for the Australian Para Olympic team.

HIRE & RETAIL, BOOTFITTING
Skiing since he could walk, competing in moguls and freestyle for 5 years, Todd now does back to back seasons in Aus & Japan

WORKSHOP
20 Years of ski tuning under his belt!

HIRE & RETAIL
Skiing since he could walk, 12 years on the Australian Mogul Team, 9 years on the freestyle circuit, when Luke is not in store he's backcountry with his camera